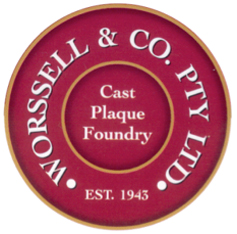 Edmund Bernard Worssell established the company in 1943, having become a Master Engraver after serving 7 years of a bonded apprenticeship under James Stewart (Master Engraver who migrated from England).

His son Edmund Ian Worssell completed a very successful Sheet Metal apprenticeship and joined the company with his father, his wife Shirley Victoria Worssell joined later and they were directors for many years.

The company is now owned by Evan Karl Worssell and his wife Michele Betty Worssell.  Evan has been with Worssell & Company since 1980 and Michele joined the company a few years later.

The company is still very much a family concern with Evan and Michele’s son Karl Thomas Worssell joining the company in 2006 and their daughter Jade Maree Worssell in 2015.

You can be sure that you will receive professional reliable service from a company that prides itself on being Proudly Australian.